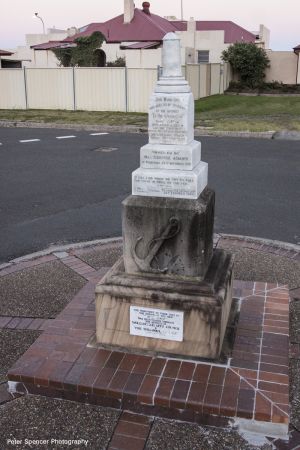 On February 13th, 1898, the brig "Amy" left Wollongong Harbour at 9 am, loaded with a coal cargo and headed north.  The seas were mountainous and the wind blew with hurricane force, and around four thirty in the afternoon the ship was driven ashore on Thirroul Beach. Despite a large crowd present on the beach that day creating a human chain to reaching within a few yards of the captain and crew, all were lost, including the captain's wife and child.  The ship quickly broke up, and two days later, the beach was strewn with wreckage of every kind.  The lifeboat came ashore uninjured on 17th February.

Afterwards, concerns were raised about the fact that no 'rockets' (for firing a line to a ship in such condition) were available at the beach. Shocked by the tragedy the local residents subscribed to a fund to build a memorial to the unfortunate people who had perished.  It was erected on Thirroul Beach close to Flanagan's Creek on 23rd November 1898, with an unveiling and dedication by Mrs George Adams of Tattersall's Hotel.

In 1908 at Christmas time vandals pulled it down in a ghastly act, throwing portions of the monument into the lagoon.  The top of the marble pillar was damaged, and old photograph show a steel spiked picket-fence was later erected to protect the monument from further vandalism. Since then, and still today, the top remains unrestored to its original glory.

Over the years the monument has been moved several times. From its original position, it was moved to the front of the Thirroul Life Saving Club facing the beach, but in 1952 it was moved to the current site at the end of Bath Street near the entrance to the Olympic Pool.  Its base is often damaged by vehicles, and the inscriptions need repair, so that a move to a safer position is being considered by Council. 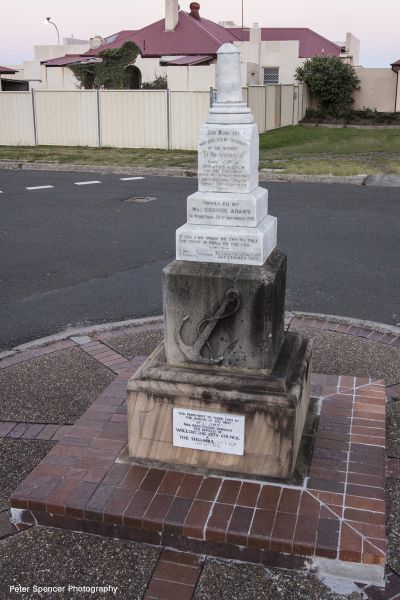